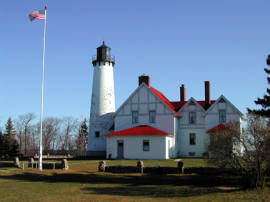 This lighthouse stands watch where Lake Superior begins its treacherous rush into the St. Mary's River. The Ojibwa Indians massacred a group of invading Iroquois warriors at this location in 1662, giving the point its original Indian name. It was noted by the early explorers, but did not become significant until the St. Mary's Falls Ship Canal opened in 1855.

Ships passing from Lake Superior into the canal came close to Point Iroquois, through a narrow passage between the sandy shores on the American side and the reefs on the Canadian side.

The original Congressional appropriation of 1853, provided $5,000 to build a light either at Point Iroquois or on an unspecified island in Lake Michigan near the Straits of Mackinac. The Lighthouse Board decided that the Lake Superior light was more urgent and a simple wooden house with an attached tower was completed in 1855.

The Point Iroquois Light was first illuminated in 1857 and its Fourth Order Fresnel lens shone over one of the busiest shipping lanes in the world: the entrance to the St. Mary's River and the Soo Locks. Point Iroquois became busier with each passing year, and the personnel and facilities required to run the station grew accordingly. In 1870 the house and tower were completely rebuilt, and in 1902, a two-story rectangular brick house was added to the residence to provide housing for the assistant keeper at a total cost of $18,000.